Despite the wheels coming off of the world economy starting last year, Dr. Robert Bell, the author of “The Green Bubble – Turning Waste in Wealth” is convinced that the “green bubble” of investment in clean tech and green energy hasn’t burst.

Quite the contrary, the Obama Administration and other political leaders outside of the United States are very much intent on re-inflating their stalled economies by funding and incentivizing clean technologies from stimulating the development and sale of electric drive vehicles to the modernizing of the nation’s power grid so it can better handle the power produced from even larger investments in renewable energy.

He estimates that clean tech, green energy-related appropriations in the American Recovery and Reinvestment Act could be as high as $70 billion dollars: others have place it as high as $65 billion. That’s a major shot in the arm for the sector, which despite the slow down in the pace of investment over the last few months, it likely to reinvigorate it because it’s seen as accomplishing several important political goals: creating “green” jobs, reducing the nation’s dependence on fossil fuels, especially petroleum, and addressing global warming.

In the light of the recent changes economically and politically, Dr. Bell has updated his book “The Green Bubble — Waste into Wealth.” It examines the impact the current economic crisis is having on the clean tech industry, which is — for the moment — dominated by European players: Vestas, Gamesa, Q-cells and many others. Those companies view the United States as their largest market and are expanding their operations here. That is, in part, the legacy of the last decade or more of American policy that ceded the technological lead in wind, photovoltaics and solar-therm to foreign companies. On the bright side, though, in Vestas’ case, 30% of shareholders are Americans.

Bell points out that unlike other types of “investments” — such as warplanes and tanks — renewable energy systems like wind turbines actually create wealth quite literally out of thin air by converting it into marketable electric power. Solar does the same thing from sunlight. He eventually sees the massive deployment of such systems around the world, driven by concerns over global warming, as well as the opportunity to make money.

What’s the biggest change since the book first came out in France? The election of Barack Obama, who is setting the political agenda for a sweeping overhaul of the nation’s energy system, including yanking $30 billion in subsidies from the oil and gas industry and shifting it to renewable energy companies. 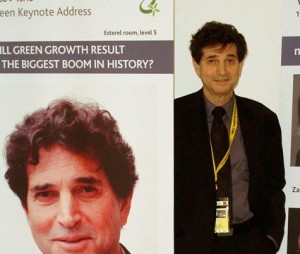 Dr. Robert Bell appears with Poster promoting his keynote address at the MIPIM conference in Cannes.